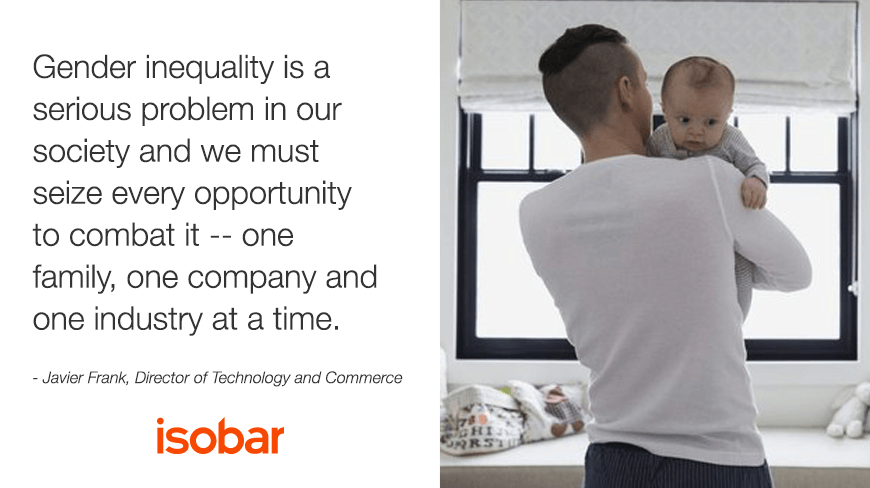 Why a Generous Paternity Leave Policy Can Be Bad for Equality

A few months ago, I had dinner with my wife to celebrate her birthday. Shortly after, as we rode along the Hudson River toward our apartment, we sighed in relief with the certainty that our son wouldn't be born that night -- because, let's be honest, nobody wants to share a birthday with their mother. We went to bed only to wake up just past midnight to rush to the hospital. Esteban was born the next day.

As it happens, my employer recently implemented a new parental leave policy that offers 16 weeks of full paid leave to any employee in care of a newborn or adoptive child. Generous and equalitarian parental leave policies like this have a well-documented impact on curbing gender discrimination at the workplace. But, this is only the case if men take advantage of them. So, as one of the first employees to have this benefit available to me, I am going to use it fully and I plan to be very vocal about it. I have to. I owe it myself and to those who come after me.

There are three key ways that policies like this can work against gender disparities in the workplace. First, their gender-blindness is inclusive of gender nonconforming parents. No company benefit should depend upon the employee's gender identity, though, sadly, it is still the norm. Second, an extended period of full paid leave allows families to fully recover from the financial, physical and, often, medical impact of having or adopting a child. Finally, by doing away with the concept of a primary caregiver, which typically defaults to the mother, it removes the unfair career opportunities advantage men get when their colleagues are out caring for their offspring.

That said, this last powerful mechanism of gender equality is only effective if men take the benefit in full, too. In fact, if the norm becomes that mothers take the 16 weeks of leave and fathers return to work earlier, the policy may even work against women by removing them even longer from their careers in comparison to men.

Discrimination at work toward mothers, and more broadly toward women in child-rearing age, is a multi-faceted problem. One of these being the perception that motherhood makes women less valuable workers due to their domestic responsibilities. In fact, while women take a 7 percent hit on expected income per child -- the so-called "mommy-tax" -- dads actually see bump in theirs.

Countries like Sweden, Quebec and Germany have a long history of providing a generous parental leave that can be divided at will between both parents. What these countries have recently realized is these policies, on their own, are widely ineffective in fighting the traditional gender division of childcare. Fathers made little use of the benefit, which reinforced the role of women as primary caregivers. Child-rearing age for women is when the gender pay gap starts to grow. This is widely attributed to women being perceived as less valuable workers because of their role as primary caregivers. This vicious cycle needs to be broken. To close the gender pay gap, men and women workers need to be equally expected to care for their children. In order for this to happen, it is necessary for men to use parental leave benefits at the same rate of women.

Nobody can force men to take paternity leave, but we can create a culture where it is expected and accepted.

Culture is easier to build than change, which is why it is essential that the fathers of those first few babies included in new leave policies understand the implications of their actions. We have an opportunity and responsibility to set the right precedent, to serve as an example to other men in our organization.

Gender inequality is a serious problem in our society and we must seize every opportunity to combat it -- one family, one company and one industry at a time. As a man in a leadership position I have the responsibility to use my influence to combat it. Esteban has given me this immediate opportunity to make things better and I am not planning to disappoint.

This article was originally published in Entrepreneur.