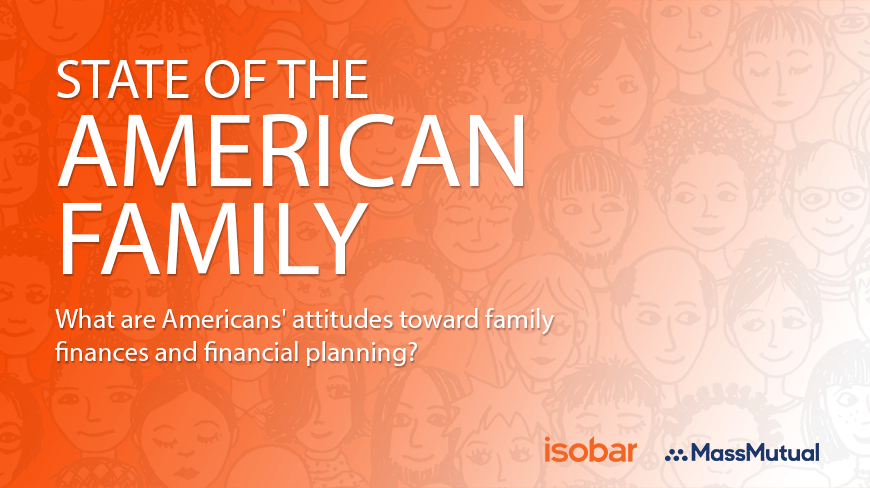 Isobar teamed up with MassMutual for its fourth "State of the American Family" study to determine Americans' attitudes toward family finances and financial planning and how they have changed. This study provides new insights and guidance to help consumers make better financial decisions.

Financial security and homeownership are at the heart of the American Dream, according to revelations in the latest State of the American Family Study released today by Massachusetts Mutual Life Insurance Company (MassMutual). The vast majority (82 percent) of Americans describe the American Dream as financial security for both themselves and their family, three-quarters say it is owning a home, and 71 percent believe it is achieving financial independence. Despite agreeing on the definition, one-third (33 percent) of Americans believe the American dream is disappearing.

More than four in five define the American Dream as financial security for themselves and their family, and more than half think this is unattainable. The majority carry debt, including student loan and credit card debt. Only one in four have enough emergency savings to cover more than six months of expenses.

The research study is based on a survey of more than 3,200 adults nationally representative of age, gender, race, ethnicity and education. The findings reveal that Americans are divided when it comes to their level of financial confidence and their ability to achieve the American Dream. With an average household income of $122,626, most are confident about short-term financial decisions, such as paying bills and budgeting (82 percent), and big-ticket purchases (74 percent). However, they are less confident in their long-term financial decisions and more than half don't believe (54 percent) they will achieve financial security for themselves and their family.

"Americans believe financial security is at the core of the American Dream, but it is alarming that so many think it is beyond their reach," said Mike Fanning, head of MassMutual U.S. "It is clear that people are taking steps to help secure their financial future and dreams, and more can be done to help to keep the American Dream alive. Starting earlier appears to be part of the solution as 'not starting early enough' was the top financial regret across all consumer groups."

In the red: Debt spurring Americans to act

The volume of debt in the U.S. is a cause for concern as the majority of Americans carry some type of debt, most commonly in the form of mortgages, credit cards and student loans:

More good news: To help solve their debt problems, 70 percent are taking steps to improve their situation by prioritizing paying down debt. Other financial priorities include, saving as much as possible (66 percent) and developing a detailed financial plan (61 percent).

Unprepared in case of emergency

The research found that if the worst did happen, many would not be financially prepared for it with at least six months of expenses saved in case of an emergency. Nearly one in ten (8 percent) have no emergency savings, and:

In other recent research* and indicative of Americans' community values, nearly seven in 10 Americans said community involvement is important to their overall well-being and nearly half agreed that being involved in communities improves their finances. In fact, more than half (53 percent) reported that they have supported someone in their community in a time of financial stress, and a quarter have been supported by others in their community during a time of need.

"Through our work in all types of communities across the U.S and in our continued research, we find optimism alongside fear, confidence alongside uncertainty, and most importantly, hope alongside desire to take steps for a stronger financial future," said Fanning. "That's where MassMutual can help."

The State of the American Family survey was conducted for MassMutual by Isobar between January 19 and February 7, 2018 via a 20-minute online questionnaire. The survey comprised 3,235 interviews with American households with children under age 26 for whom they are financially responsible. Interviews were conducted among men and women aged 25-64 with household incomes equal to or greater than $50,000. Respondents had to contribute at least 40% to decisions regarding financial matters in their household to qualify. Results were weighted to the 2017 CPS March Annual Social and Economic Supplement of the US Census for age, gender, ethnicity, region, and weighted to the 2016 American Community Survey Public Use Microdata Sample for same sex married/partnered couples, to be representative of American families in this age and income bracket. This study includes trending data for the previous survey wave conducted in 2013. The sampling margin of error for this study is +/- 1.72 percentage points at the 95% confidence level when looking at the results for the total surveyed population.