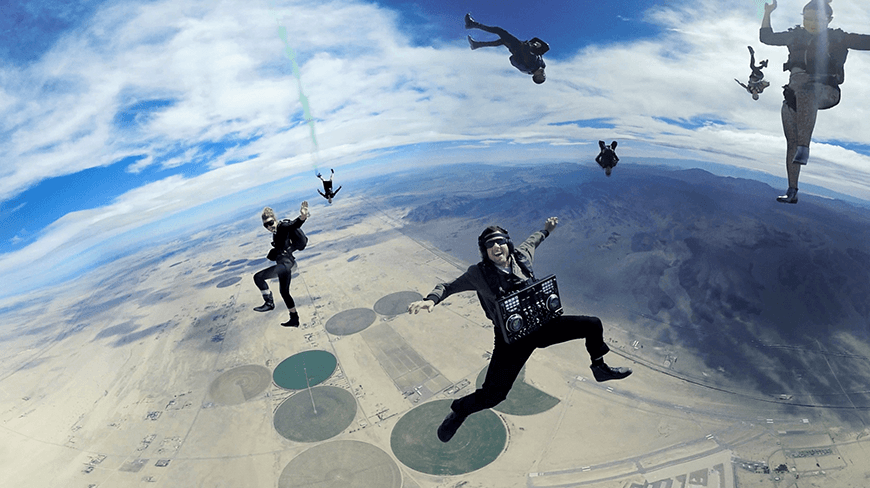 In the spot, “DEW VR Beat Drop,” viewers are transported to classy lounge party with a twist: when the music beat drops, so does the party – literally. The experience transforms into a high flying free fall skydiving experience. The free fall is meant as a continuation of dew’s party in the sky, with the same characters from inside the club (DJ, bartenders and patrons) soaring in the air above a desert.

This campaign was created to mark the official launch of the new Mountain Dew Label Series, a new premium Dew product, and is the brand’s 5th extreme VR experience to date for DEW Nation.

The experience was created by Dew’s digital AOR, Firstborn,  in partnership with production company, Digital Domain. It will be shared with fans on Samsung VR and at Mountain Dew’s upcoming Coachella activation, as well as across select university campuses.

Where did the idea for this VR experience come from?

The DEW VR Platform is all about giving DEW Nation never-been-done before engaging experiences-providing fans with access to adventures that might not be possible without future-forward technology. So when we were tasked with creating an experience-driven campaign for the release of Mountain Dew’s latest product series that is all about transforming experiences into the BOLDY REFINED we naturally gravitated towards the transportive power of VR to give fans access to a refined, exclusive VIP party with a uniquely bold twist.

How hard was this to film? What was the best part of filming this?

It was a pretty grueling shoot day (18 hours) and there were a lot of variables that had to be just right for this all to work – Definitely one of the more challenging productions we’ve taken on. In the same day we had to shoot the jumps out in the Mojave Desert and the club scene back in LA so there was no margin for error. We only got a few takes of the jumps and had to trust that the equipment would work, that the stunt divers would nail their performance, and that it would all come together in post-production. Furthermore, the jumper’s costumes had to look stylish for the club, and also hold up to traveling through the air at 190 mph. A lot of things could have derailed the shoot, like weather, gusty winds, cloudy skies, jumpers missing their marks, or equipment failure due to the extreme nature of the shoot. Fortunately, we were working with the awesome production team at IM360 and some of the world’s best stunt divers who were able to pull this off flawlessly.

Filming the jumps was challenging because we weren’t able to see what we were capturing in real time. Once the team went up in the plane, it was lights out until they got to the ground and we were able to put together a rough stitch of the footage. Only then could we review and provide feedback. Luckily, the stunt team was fantastic and really nailed their performance.

What are your thoughts on the final product

We couldn’t be happier with the final product. It’s more exciting than we had hoped and the quality is great. It definitely sells through the concept of “Boldly Refined”.

Why is this such a good fit for Coachella? For university students?

Mountain Dew’s Coachella activation will bring to life the brand verticals of music, fashion, technology, mixology and art. DEW VR Beat drop is one element of this activation that brings these verticals to life in a whole new way.

What’s the message the VR experience is aiming to convey?

Through DEW VR Beat Drop we want consumers to understand that Mountain Dew Label Series is a cool, new premium DEW product series that can transform the everyday into the Boldly Refined.

Favorite memory in the process of creating?

My favorite memory in the process of creating this is when it went from being impossible to pull off, to us saying “hey, we can actually do this”. That and working with a C-130 Hercules aircraft.