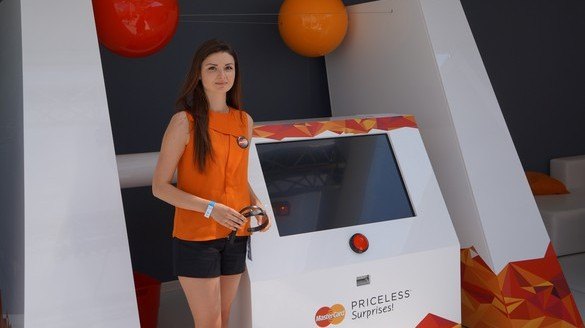 Orange Warsaw Festival has come to an end on Sunday. The party continued not only on the main stage, but also in the special zone of MasterCard. Visitors could, among others, make purchases using MasterPass Pop Up Store or participate in an interactive play based on EEG technology. Isobar Poland, part of Dentsu Aegis Network Poland, is responsible for both projects.

Thanks to using the EEG (electroencephalograph) technology created was an interactive game that allows participants to acquire gadgets. Isobar created an interactive carrier, whose elements are 2 colored balls – thanks to the application, the bullets could physically connect to the MasterCard logo. Participants of the challenge put on their heads a special set which measured the strength of concentration. The more focused a player, the faster approached each ball. Over 550 people participated in the game.

MasterPass Pop Up Store - is an interactive purchasing website offering clothing from independent Polish designers, which allows to purchase selected products offered by Showroom while using the technology of the MasterPass. The project, created by Isobar Poland, premiered in December 2014 during an event organized in  Galeria Mokotów and at independent fashion fair #Hash Warsaw.

- MasterCard operates on the cross of payments, technology and creativity. We look forward to every opportunity to emphasize this in a unique way - said Luiza Derek, Director of Marketing at the Polish branch of MasterCard Europe. - We are glad that music fans so eagerly take part in some of our offered activities. Thanks to them, they come back from the festival with not only musical memories - she adds.

This year Isobar will support MasterCard’s zones also at the Open'er Festival in Gdynia and the Off Festival in Katowice.