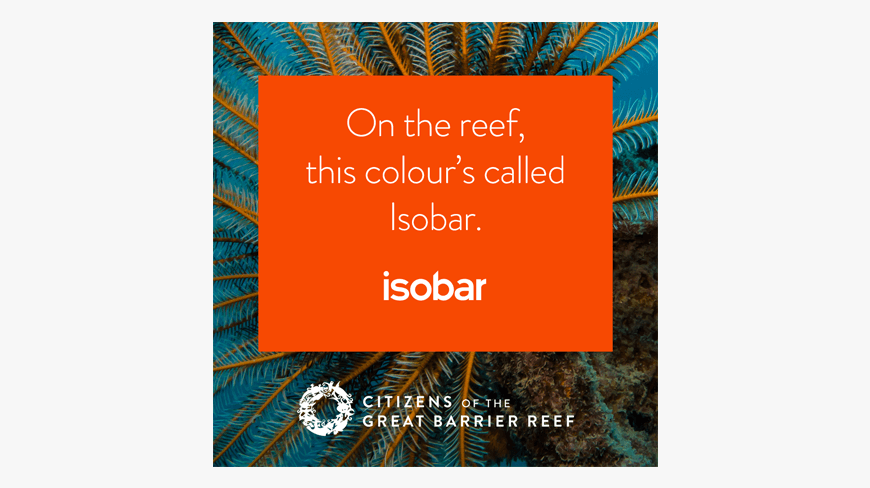 WiTH Collective - Linked by Isobar Launches ‘Unite for the Reef’

The colourful social campaign invites people to reserve their favourite colour from the reef to share on their social channels, putting vivid pops of colour across the digital landscape.

Initially, the site launched with six actions that range from saying no to straws to reusing coffee cups and replacing plastic with canvas and collectively feed into a dashboard that shows the global impact of seemingly small, individual choices. By signing up to citizengbr.org, individuals can claim their own colour of the reef and encourage friends, families, supporters and clients to do the same.

Andy Ridley, CEO Citizens of the Great Barrier Reef, said: “Citizens of the Great Barrier Reef is inspired by the Reef’s annual coral spawning event that sees billions of tiny gametes and spawn -  colourful lifeforms -  flying into action and working as one to ensure its survival. We need humanity to do the same. We are asking the world to unite as one – like the Reef does – to protect one of the most beautiful natural assets the world has to offer.”

Citizens of the Great Barrier Reef will also support real reef management and conservation projects along the 2,300 kilometres stretch of Queensland’s coastline. These include tackling outbreaks of coral-eating crown-of-thorns starfish, protecting endangered loggerhead turtle habitat and supporting graziers to decrease sediment runoff into Reef catchments. Through the Citizens platforms, people from around the world can follow, support, initiate and be inspired by these projects.

Developed and launched by WiTH Collective and Citizens of the Great Barrier Reef, the campaign aligns with the agency’s mission: to transform brands, businesses & people’s lives with the creative use of digital.

Dom Hind, COO and Co-Founder WiTH Collective Linked by Isobar said, “We’ve been doing lots of things to reduce the agency’s environmental footprint. It's something I’ve become particularly passionate about. So when Andy got in touch about Citizens of the Great Barrier Reef, and spoke to us about their ambition of creating meaningful change for the Great Barrier Reef, we jumped at the chance.”

Join the movement today by becoming a Citizen of the Great Barrier Reef at citizensgbr.org. And just in case you have a particularly favourite colour, here’s where you can reserve your favourite hue: citizensgbr.org/colours