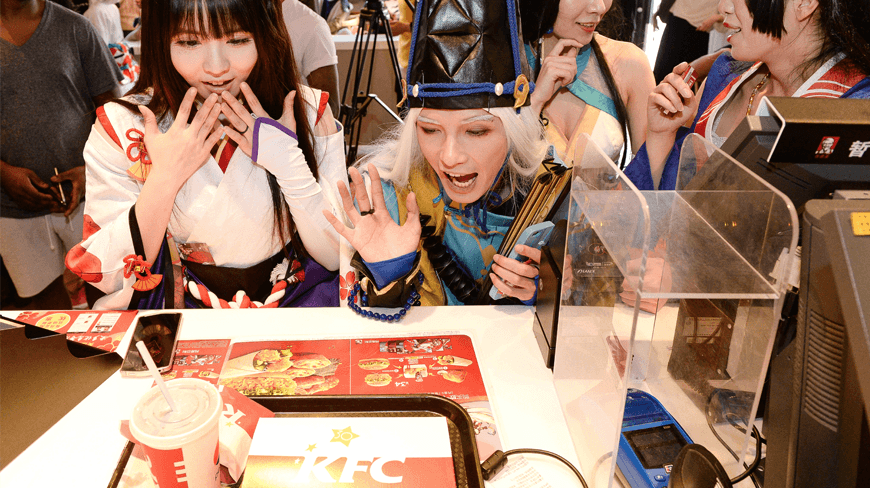 When KFC partnered with Baidu to implement face-recognition technology at a self-order kiosk in one of its Beijing outlets late last year, it became a story that was widely covered by international media such as The Guardian and TechCrunch. It was not KFC’s first foray into AI. In the summer last year, the fast food chain already created some buzz when it collaborated with Baidu and Trio Isobar to launch Dumi, a robot that took orders from customers with voice-recognition technology at its Original+ concept store in Shanghai.

Asked if he was pleased with the media attention, Steven Li, senior vice president of KFC marketing with Yum China, said Dumi and the face-recognition kiosk were not mere marketing gimmicks. “We wanted to be low-key actually, because it was only a pilot. Our digital ecosystem has become very mature and we hope to embrace technology by partnering with tech companies,” Li told Campaign Asia-Pacific at the Yum China office in Shanghai recently.

With China at the forefront of digital technology and mobile payments, KFC has kept pace by launching its mobile app and going big on cashless payments and ecommerce in recent years. In the first fiscal quarter of 2017, mobile payments accounted for more than 30 percent of KFC’s sales in China, while delivery took up about 11 percent of its sales during the same period.

Li said bringing AI would be the next step forward to further increase convenience for its customers. Dumi, as he said, was a pilot that lasted nine months to see how voice-recognition technology would work in a retail restaurant environment in China, where accents and dialects vary widely. (Kolonel Fast Connect, a voice and motion-activated self-ordering kiosk that understands Cantonese, was launched in Hong Kong in April this year.)

“It’s very difficult. But in the nine months, we accumulated a lot of learning about AI, data, voice recognition…and discarding background noise," Li said. "It’s actually pretty tough, but fortunately, we almost got everything correct."

Chris Chen, CEO and chief creative director of Trio Isobar, pointed out that voice-recognition technology is fairly mature. The real innovation comes in transferring the technology to retail and user experience. “In real-life circumstances, the people who come to the stores don’t exactly fall into categories we have set out. Our experience taught us that we have to adjust accordingly,” said Chen.

A machine that speaks to customers and predicts orders may or may not reduce ordering time—after all Chinese customers have already been able to skip the line by ordering through mobile. Li admitted the brand hopes the novelty factor will keep customers interested. “Consumers feel that KFC is a young brand, that we know what future experience is all about,” said Li. “Having said that, it is not until the user experience becomes well designed that we will roll out this feature [in other restaurants], there is still a lot of work to be done. But we want to be the first brand in retail restaurant to try that, rather than the second.”

As it is, Li believes that machine learning will surpass that of the nuanced human interactions customers have with a cashier at the counter. “When you order through a device, it is actually a machine serving you," he said. "A machine will remind you of an unused coupon, predict your orders based on your transaction data, offering better services than a human waiter.”

Needless to say, part of KFC's strategy is also to be in full possession of the transaction histories of its customers as well as their vital data. That was the reason KFC launched its app in 2015; it more or less functions like a CRM system in the pocket, which also logs in customers' orders and their frequency of visits.

“Prior to 2015, we could only know what the customers think about our products through Weibo," Li said. "But now they can give us instant feedback on food quality and customer service on the phone and recommend their favourite products or send gifts to their friends.”

Li is full of praise for the app, calling its launch a milestone that overturned the brand’s advertising and marketing model. “Now that we have the app, we can publish content and reach consumers directly without going through the media channels,” said Li. In jest, he said the KFC brand is akin to a KOL itself with the high number of followers it has and the great volume of content it produces.

“Of course, it is very hard to convince every Chinese consumer to download the app," he said. "But surely every one of them would at least have WeChat, Alipay or Baidu map. If we limit our digital services to only the app, then our user base would be limited."

He stressed that KFC intends to build an open digital ecosystem and welcomes partnership with different platforms. It is a winning strategy for KFC as having 'lite' versions of its apps on online payment channels gives it access to the customers’ transaction data. The brand was able to leverage user data available on Alipay to push special birthday offers in a campaign last year, for example.