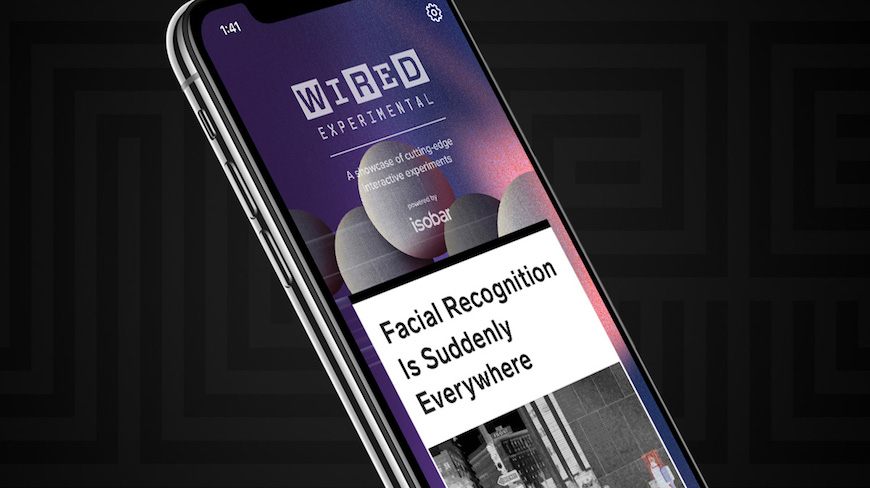 After the success of last year’s 25th Anniversary celebration, WIRED returned this year with another installment of WIRED25 in San Francisco. Global Digital Agency Isobar returned as the Digital Experience Agency with an updated version of the Get WIRED app (Android - iOS).

Launched just prior to last year’s event, Isobar and WIRED have spent the past several months adding new content and features to the app including the ability for subscribers to save their favorite articles, the addition of WIRED podcasts and the first Experiment, which takes a closer look at WIRED’s coverage of facial recognition, including this piece “Facial Recognition Is Suddenly Everywhere. Should You Worry?”.

From privacy to policy to pornography, WIRED has looked at the topic from every angle and the Experiment expands on that coverage by giving the user the ability to learn more about how face scanning works, how easily it can be tricked and why that’s so concerning.

This experiment enables people who have downloaded the app to explore the technology that sits behind facial recognition and the bias that could be perpetuated by it. The tool enables readers to play with how machines’ recognise and read reality by using their camera to adjust the data available to a neural network. For example, if technology only determines faces by the precise positioning of human features, then if the reader covers their nose, their face will no longer be recognised by the tool.

The Experiment is the first in a series that is designed to expand on WIRED’s coverage of the most significant topics and trends in technology and culture by bringing those subjects to life and putting them in the user’s hand.

‘Experiments’ was created by Isobar to enable new forms of digital storytelling. Isobar’s deep technology expertise enables WIRED editors and WIRED Brand Lab, in partnership with sponsors, to go beyond the pages of the magazine with new forms of storytelling, bringing static content to life. This is a joint effort by Isobar and WIRED to engage readers and create new sellable opportunities for sponsors.

Dave Meeker, Isobar US Chief Innovation Officer said, “From a Guide to AR in AR to a Quantum Computing Experiment, the in-app media space is one of the most exciting places for brands to come together with consumers, powered by the prestige and powerful research of the Wired team. It goes beyond brand content, providing branded experiences that connect with Wired’s advanced technological audience in unprecedented ways.”

Since its first issue in 1993, WIRED has not only chronicled change but led it, introducing big ideas that transformed the way the world thinks and documented the digital revolution. This year’s WIRED25 (https://xp.wired.com) is focused on the people who are working to fix what’s broken from climate to business and from politics to medicine.