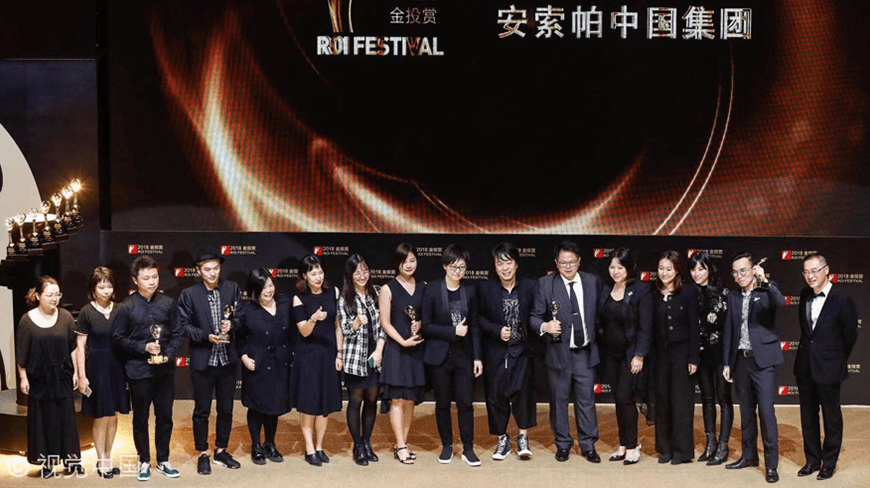 The 11th ROI Award for Business and Innovation took place on 18th October in Shanghai. Isobar China Group stood out with four Gold, four Silver, and nine Bronze medals, as well as the Digital Media Agency of the Year, totalling 18 awards.

According to statistics, 626 companies submitted 3,439 pieces of entries, which showed an increase of 12.2% and 10.3% respectively over last year. Although there are more companies and work in the pool, the Gold winning rate has reached a low record of 1.8%, 8% down compared to last year.

Alvin Huang, CEO of Isobar China Group, said: “ROI’s recognition of our works proves that our unique products and services have become a solution to our clients' business. This year we won the applause of the judges with multiple cases and the Digital Media Agency of the Year, which is a recognition of the team's achievements in omni-channel design. With the industry's affirmation, we will spare no efforts to become experience agency of record."

Established in 2008 in Shanghai, China, with 11 years of development, ROI Festival has become the largest and most influential business creativity awards in Asia, as well as the most influential Chinese award for global recognition. ROI Festival’s mission is to form a creativity force which is uniquely Chinese, but also recognised by global marketers and consumers.

Below is the list of Isobar’s Gold medal-winning work:

Smartphones are known as a communication tool. Although the Huawei Mate 10 is waterproof, its usage in water is very rare. Isobar was briefed to create something that would engage and touch Huawei’s customers. We created a emotive video showing the waterproof function of the Mate 10 among the love between a fireman and his young daughter. The story touched not only firemen but also more than 2 billion people.

With the deep cooperation with Oriental DreamWorks, Isobar China Group helped KFC collaborate with the National Museum of China to bring the national treasure back to life. We transformed the historical work “Emperor Xianzong’s Celebration in Lantern Festival “into an interactive digital media. From the perspective of "awakening history with technology", we joined hands with world-class new media artist Lin Junting to reinterpret historical works with digital technology. We brought the national treasure to the consumers, letting the young generation experience the folk art of Cosplay 500 years ago, the fireworks party, and 3D light show and so on.

By online multi-person interactive methods, we set up interactive screen devices in KFC theme stores, subway stations with a high-density of population people, and the National Museum of China, which truly enabled the national treasure to get close to everyone.

1987 was the year that the Chinese idol group Little Tigers was born, and also the first year of KFC in China. They both left a deep impression on a generation of Chinese people. 30 years later, the new era idol group TFBOYS sang the classic song "Love" of the Little Tigers for KFC, and touched the memories of two generations.