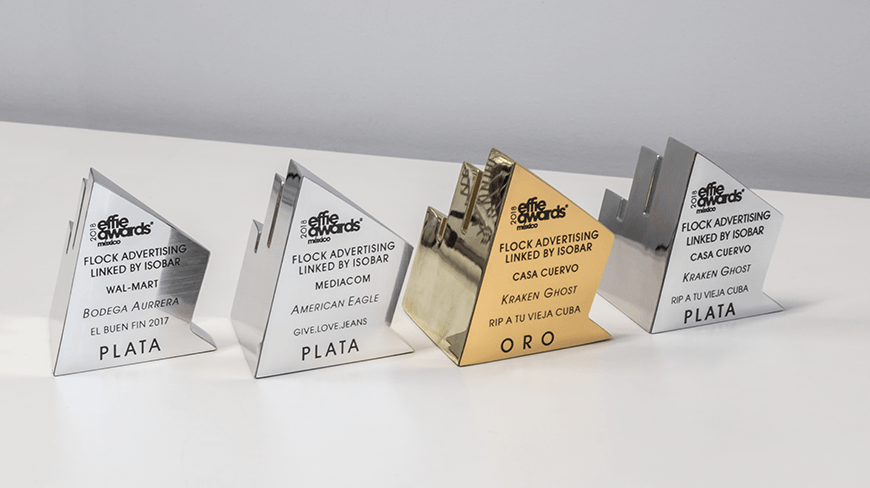 Flock Linked by Isobar were one of the big award winners at the Effie Awards Mexico, for their Walmart, American Eagle Outfitters and Kraken work. The Effie Awards recognise the best work in the country for effectiveness and contribution to the growth of brands, with the award ceremony held in Mexico City on Wednesday 24 October.

With successful projects grounded in insight and delivered through the creative use of digital, the agency led by Mario Nissan received a Gold and three Silver medals in the "Small budgets” (Gold), "Alcoholic beverages and tobacco" (Silver), "Retail" (Silver) and "Promotions" (Silver) categories.

“Goodbye to your old Cuba” for Kraken, from Casa Cuervo, won the Gold Effie in the "Small budgets" category and Silver in "Alcoholic beverages and tobacco". The work focused on the insight that the drink ‘Traditional Cuba’ was perceived by the public as an antiquated cocktail, so it set out to generate a new version with ‘Kraken Ghost’, its flagship white rum.

The campaign took advantage of the Halloween season to generate digital content referencing classic horror films and used the iconic character of the brand, ‘The Kraken’, as the protagonist that would end the ‘Traditional Cuba’. The campaign went viral through Facebook, Instagram and Twitter; while on YouTube the public decided how to eliminate the  ‘Traditional Cuba’ through interactive videos. As a result, Kraken saw a 106% growth in sales within self-service stores, and recall went from 9% to 22% and intention from 16% to 30% on social media.

Flock Linked by Isobar was also awarded Silver in the "Promotions" category for supermarket chain, Bodega Aurrera, part of the Walmart family, which integrated listening, conversation, personalised marketing and operational marketing. The hashtag #PasaElPrecio was created which enabled consumers to report lower prices in competitor stores, so that Bodega Aurrera could match them, supported by the Waze app which indicated the branches with the best prices. The campaign included influencers and organic content across social media, and included the popular character ‘Mama Lucha’ who directly answered customers' questions in real time.

The Facebook Messenger chatbot created for "Give.Love.Jeans" for American Eagle also received a Silver medal, in the “Retail” category, which took advantage of the change of algorithm announced by this social network in March of 2017. Users who interacted with the chatbot were given discounts of up to 40% in store, which drove engagement with more than 1,700 people, with more than 8,000 coupons distributed, delivering a return on investment of 59.3%.

Mario Nissan, CEO, Flock Linked by Isobar, said “I’m proud of our talented teams for this achievement at the Effie Awards. But I’m particularly proud of the fact that we're one of the only agencies that continue to win big year on year, showing great consistency and adaptability.”

Flock Linked by Isobar’s wins at the Effie Awards follows a successful 2018, most recently being ranked second in the Effie Index, being the most awarded agency at the IAB Mixx Awards, and consistently named by Scopen as the number one Digital Agency in Mexico since 2015. Flock were also ranked in the top 10 Creative Agencies Index in 2017.

Flock Linked by Isobar joined Dentsu Aegis Network in 2016, and is part of global digital marketing agency Isobar, helping transform businesses, brands, and people’s lives through the creative use of digital.