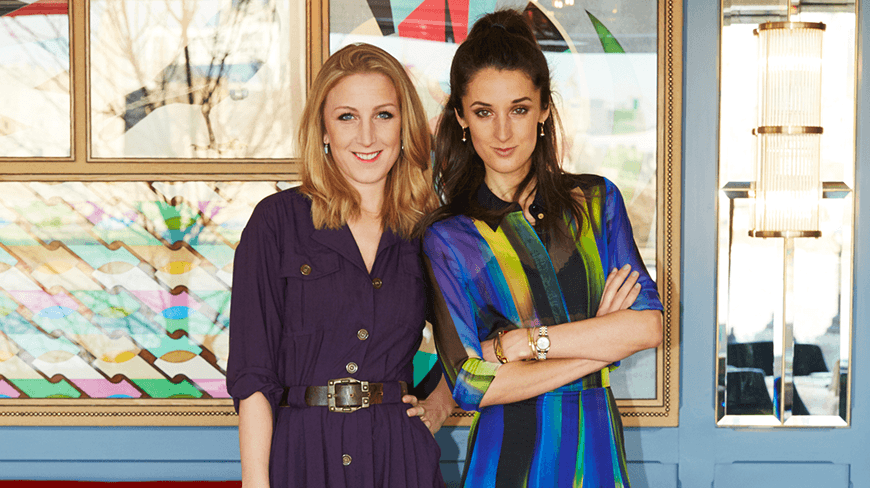 We talk to FashMash about their Pioneering new event

This month kicks off a year-long programme of talks featuring the world’s brightest minds dissecting the intersection and the future of fashion and technology. The event, ‘FashMash Pioneers,’ by FashMash, will launch on the eve of London Fashion Week, Thursday 15th February, with Tomas Roope, Creative Lead at Google ZOO, discussing the impact of machine learning and personalisation on the future of the industry.

Isobar has partnered with the series and had the exclusive chance to chat with FashMash founders Rosanna Falconer and Rachel Arthur about being at the cusp of technology and fashion for over 10 years.

Why is the crossroad of fashion, digital communications and technology such a point of interest?

Rosanna: Fashion was traditionally an exclusive industry with designers hidden away behind the mystique of their studios, their creativity showcased only biannually at fashion week.

Communication of their vision was through the filter of a journalist’s words or a buyer’s edit. Technology has broken down those barriers in every way - from social media to personalisation in customer data. For me, it holds endless opportunity for the industry.

Rachel: The fact of the matter is, every industry has been disrupted and transformed from the inside out by technology and the role digital now plays in consumers’ lives. The result is that if you want to survive as a brand in modern day, there’s little choice but to think about this world.

What’s interesting of course, is that to do so as individuals in these businesses, it has really been about forging new ground - exploring opportunities and challenges that haven’t been presented before - and becoming that internal change agent, which is no small feat.

Having a support network around you and a community equally trying to achieve the same, is thus crucial. Real progress comes from such collaboration, which is what FashMash has always supported since its inception in 2012.

We hear much about fashion brands adopting new technologies, but do you think that technology companies are on the verge of a major breakthrough into fashion?

Rachel: This really depends on what you consider the term ‘fashion’ to be. The iPhone has become a version of fashion in reality, which makes Apple a fashion brand. So have Beats headphones. And then there are of course the myriad of smart watches attempting to also fulfil this aim. What we haven’t yet seen is a tech company producing successful connected apparel. I don’t think that’s imminently on the cards, the margins don’t make it a realistic move for such big players. What we will see instead however, are continued partnerships between these worlds. Tech brands want the association with fashion, and fashion increasingly desire it the other way round.

What are your 2018 predictions for the space? What excites you?

Rosanna: I’m excited by the fact that we are moving beyond gimmicks and tech for tech’s sake. It is the natural synergy between the industries that excites me.

Increasingly, creative directors of luxury brands are being employed to oversee the entire creative and artistic vision, like Hedi Slimane at Celine as of recently. Companies understand that digital creative output can no longer exist in silo.

That’s a huge step considering our FashMash members typically founded digital departments that were considered almost an after-thought or an extension of an existing department 10 years ago.

Rachel: As we start to see digital transformation truly impact these businesses, and indeed this lift of siloes internally as Rosanna has mentioned, what’s going to impact the industry more than anything is the next layer of intelligence coming our way.

AI at its core, is going to make waves in every industry across the board, and fashion is no exception. That’s going to mean amazing things for these teams - for our digital marketers for instance and how their jobs become ever more successful with smarter targeting and conversion driving through personalisation strategies, for instance.

But it’s also likely to change the nature of our industry from a manufacturing point of view, from an automation perspective, and especially in terms of both customer service and customer experience.

What’s your motivation behind launching FashMash Pioneers? What do you hope to achieve?

FashMash Pioneers is designed to nurture leading minds at the intersection of fashion and technology for individual, personal and professional development.

Our community was established in 2012 and since then has become a very close knit but expansive group of individuals in the industry who turn to and lean on in each other for insights and support day-to-day.

One of the biggest pieces of feedback we had was how we could bring something that would sit on top of that foundation acting as a level of insight, inspiration and education on the space.

What was key to us, however, was to do this in a way that would continue to drive the high level of engagement our community holds. The industry conference model by comparison is stale and broken. Previously people went to conferences for a couple of days with high ticket prices. Now, teams are leaner and can’t afford to have people out of the office or pay for the large conference fees. Plus, each conference was starting to feel the same, with the same panel sessions and repetitive speakers that you don’t need to see in person. Discovery and inspiration have been lost, and the bid for tactical learning sessions have not delivered.

We aim to bring together our community members, alongside industry up-and-comers as well as those interested in breaking into fashion, and inspire them through highly curated content and speakers with a simple format and frequency. In turn, we hope this will help people progress personally and professionally, and from a macro perspective, in some way aid in preventing brain drain from the fashion industry.

This is a real challenge that exists in our vertical - successful individuals losing drive within the space because the traditions of such businesses are placing restrictions on their ability to make true impact. What we want to do is help bring a sense of energy to their roles, to what the future of this industry holds and to the sort of influence they can have if they stay and fight for it.

Can you tell us more about the first event on 15 February?

We are launching on Thursday February 15, the eve of London Fashion Week.

For us, it was important to bring a tech leader into this space, given it is a time when the globe’s eyes are on London as a fashion capital.

Google Zoo’s Tomas Roope is just that man. He is the charismatic Global Creative Lead for the tech giant’s think tank, focusing on pushing the limits of creativity through technology. Collaboration - a concept at the heart of FashMash - is also central to his own career.

He founded The Rumpus Room in 2007 to harness the power of co-creation and align this activity with brand communication. Rachel will be asking him how innovation can transform the industry, exploring the role design and tech has played throughout his award-winning career, and considering what the future of this creative industry looks like through the lens of technology.

You can get your tickets here.