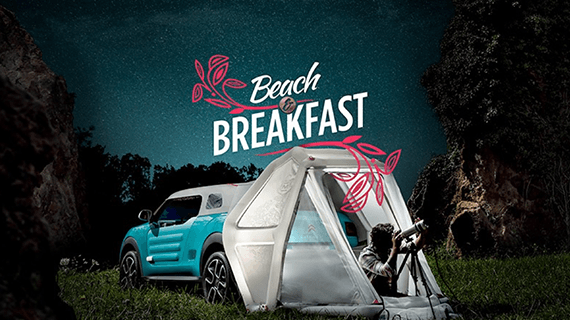 For the release of its latest concept-car, inspired by the Méhari, Citroën is coolly taking up its new "Be different. Feel good" position and, in conjunction with Isobar, is offering an experience never seen before in the vehicle world. From September 15 to October 14, the first motorized Bed & Breakfast will open its gates to travelers from 7 countries. "Beach & Breakfast" is the adventurous, way-out version of the traditional "Bed & Breakfast" and will guarantee its guests a weekend quite unlike any other, focusing on relaxation and fun with the CITROËN CACTUS M concept.

For the first time in the vehicle's history, one manufacturer has decided to offer the general public the chance to drive a concept-car immediately after it has presented it at the Frankfurt trade fair.

The CACTUS M concept will welcome lucky travelers for an unforgettable private ride.

A night in an idyllic setting, including a wake-up coffee overlooking the ocean and an introduction to some truly sensational

sports. Here is a preview of the fun program, thought up and offered by Citroën and Isobar.

The operation is being deployed in 7 countries: France, Germany, Italy, Spain, the United Kingdom, Belgium/Luxembourg and the Netherlands.

A 100% outdoor adventure with resolutely digital roots. Travelers seeking fun can write in just a few characters what motivates them and share it on social networks to reap as many votes as they can and thus increase their chances of winning.

The "Beach & Breakfast" operation was officially launched at the Frankfurt trade fair on September 15 by Linda Jackson – Citroën Manager, herself, with a teaser video produced by Isobar and relaid through a creative social branch of Facebook, Twitter and Instagram.