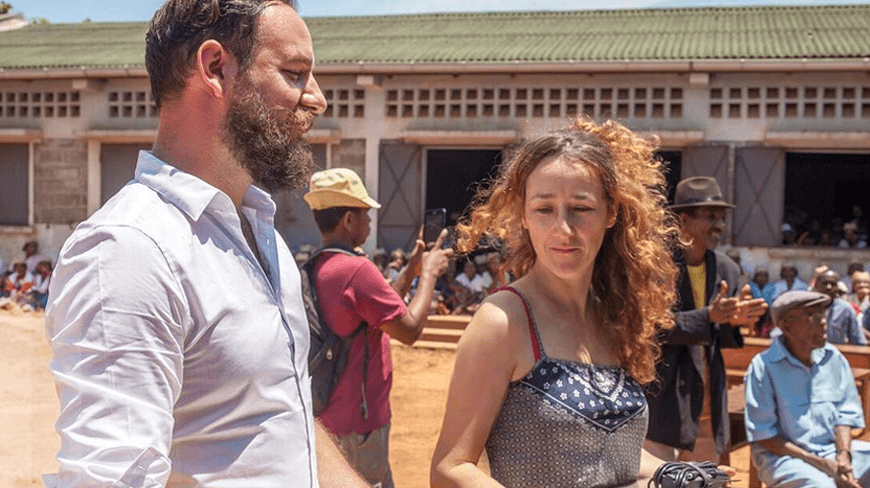 Nathalie Cauvi, Art Director, travelled to Madagascar in November 2015 to assist underprivileged people in the local community, alongside an NGO association, AFDI, and supported by blue-infinity through a donation of computer hardware.

After an 18 hour flight, Nathalie landed in the capital Tana, where after an arduous 35 hour internal transfer by rickety train, she arrived in the Eastern township of Manakara. She remarked that 90% of the population there are children. “Due to the menace of extreme poverty as well as an ageing population, having children means that traditions are continued and families are sustained” she said.

Nathalie has already experienced first-hand a few of the world’s developing countries, including Togo. “Madagascar is amongst the poorest countries in the world. Only 10% of Madagascar has access to electricity. The country tries to face terrible corruption and political problems.”

Agriculture is a vital source of livelihood for the people of Manakara. 90% of the population are self-sustained from their rice paddies. “However, they are small fields. They’ve been divided up according to long standing family rights.” To continue tradition but also improve for the future, AFDI runs courses for the young generation of Manakara, so they can go to school and obtain a degree in agriculture.

Nathalie presented them with a computer, donated by blue-infinity, so they can access the internet. The end-goal is to deliver more technology so all the students can have access. A honey cooperative also exists; farmers can pool their use of farming equipment and produce honey from lychee flowers that meets EU-norms, for export to Europe.  A second computer was presented to the cooperative to help facilitate administration and data storage. Finally, the village of Vohindava also received a computer, during a local NGO partnership ceremony with KTTF(Koperativan'ny Tsara Tantely Fitovinagny), before the new village mayor.

Nathalie preserved these moments in her sketchbook. “The kids were so happy to recognize drawings of themselves in my book.” Nathalie plans to return in November 2016 and donate more equipment. “People were so welcoming and the experience was enriching! We can continue to help by providing them the resources to achieve their goals”.

If you want to join Nathalie in this human adventure, similar expeditions are organised every year!